This avalanche testing station was a project for my Industrial Design Studio I course. During the class I collaborated with designers and engineers from Fresh Consulting, a robotics-focused consultancy in Bellevue, Washington.
The prompt asked us to create a robotic solution within a certain area of focus. I was assigned "natural disasters," and chose to focus my research on avalanches. Below is my journey map which outlines several existing protocols and solutions.

I based my first sketches on the "before" side of the journey map, exploring how robotics could be applied to different avalanche prevention methods. The first two sketches show a remote controlled snowmobile for placing explosive charges, paired with VR goggles that would allow the operator to visualize risk factors such as slope angle. The other two drawings show an automatic snowpack probing system that determines avalanche risk based on snow density readings. 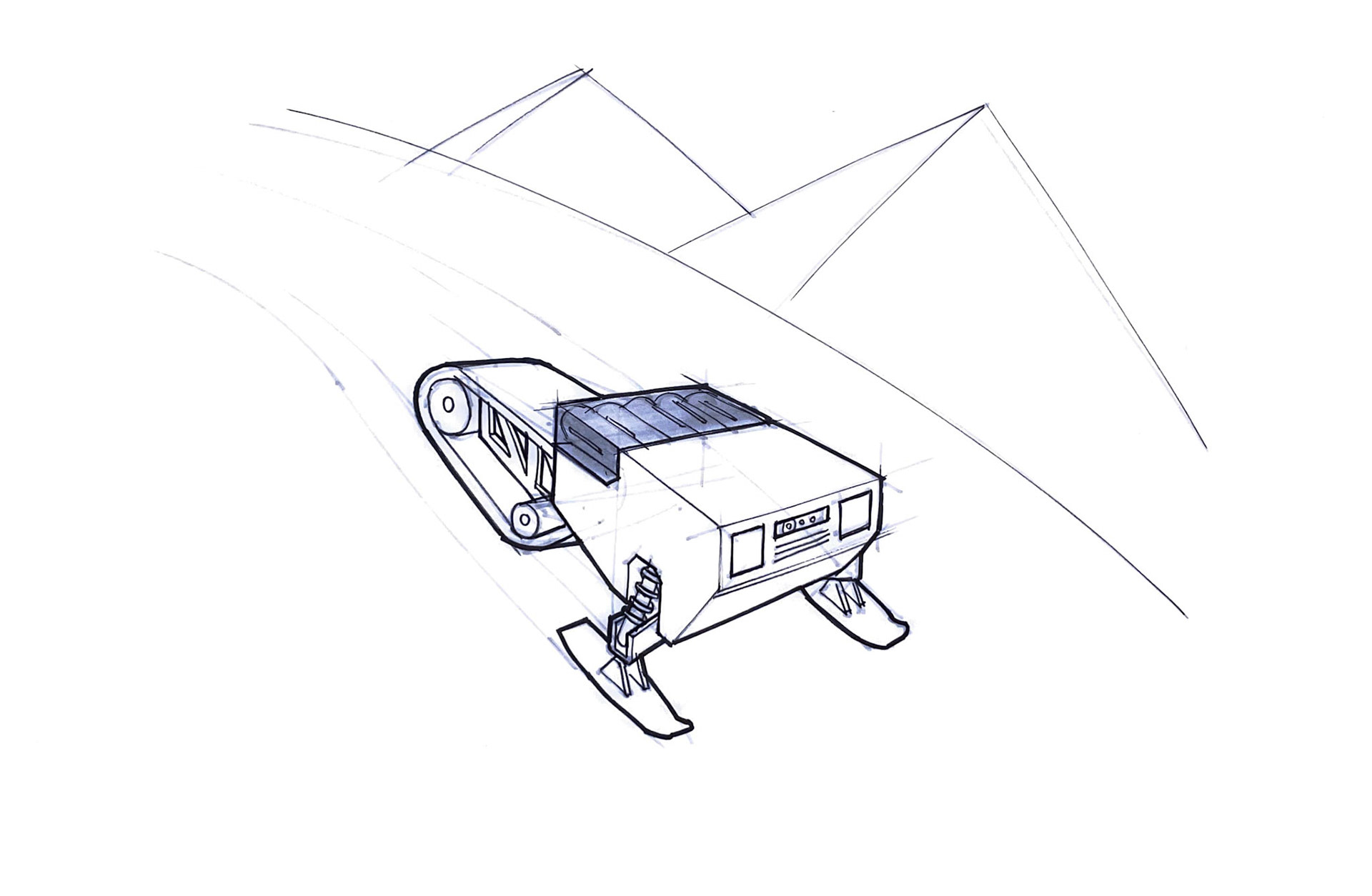 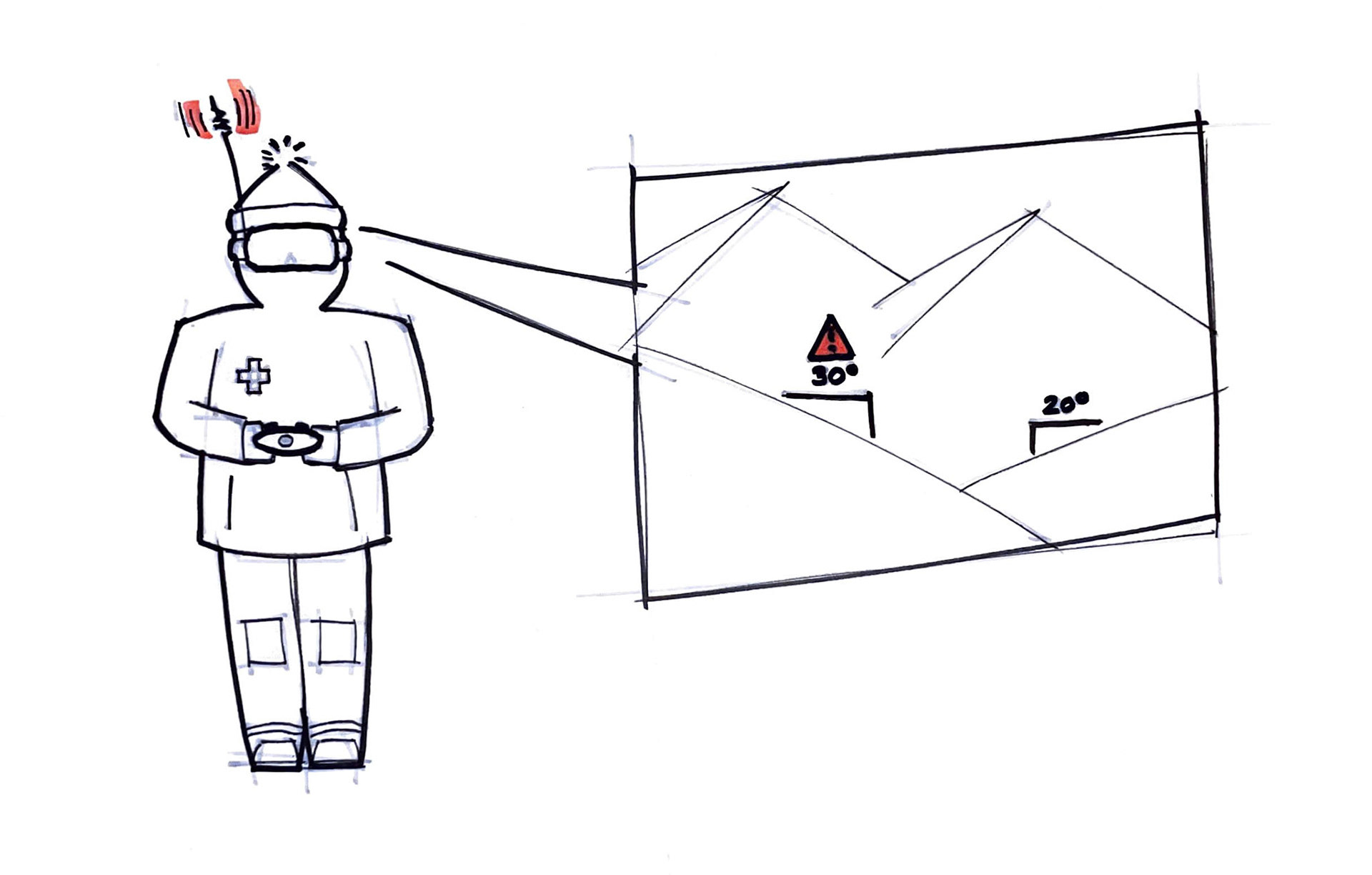 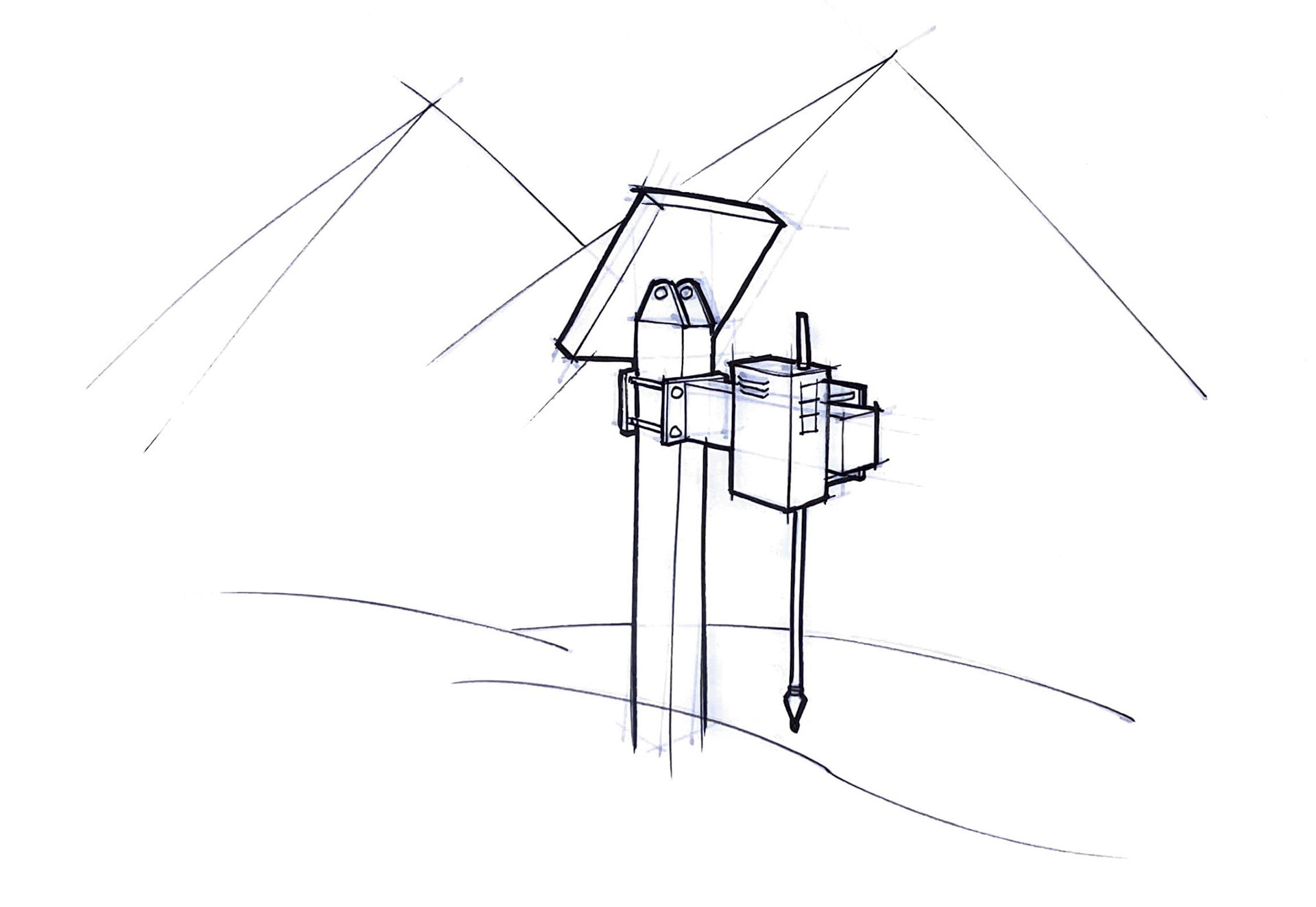 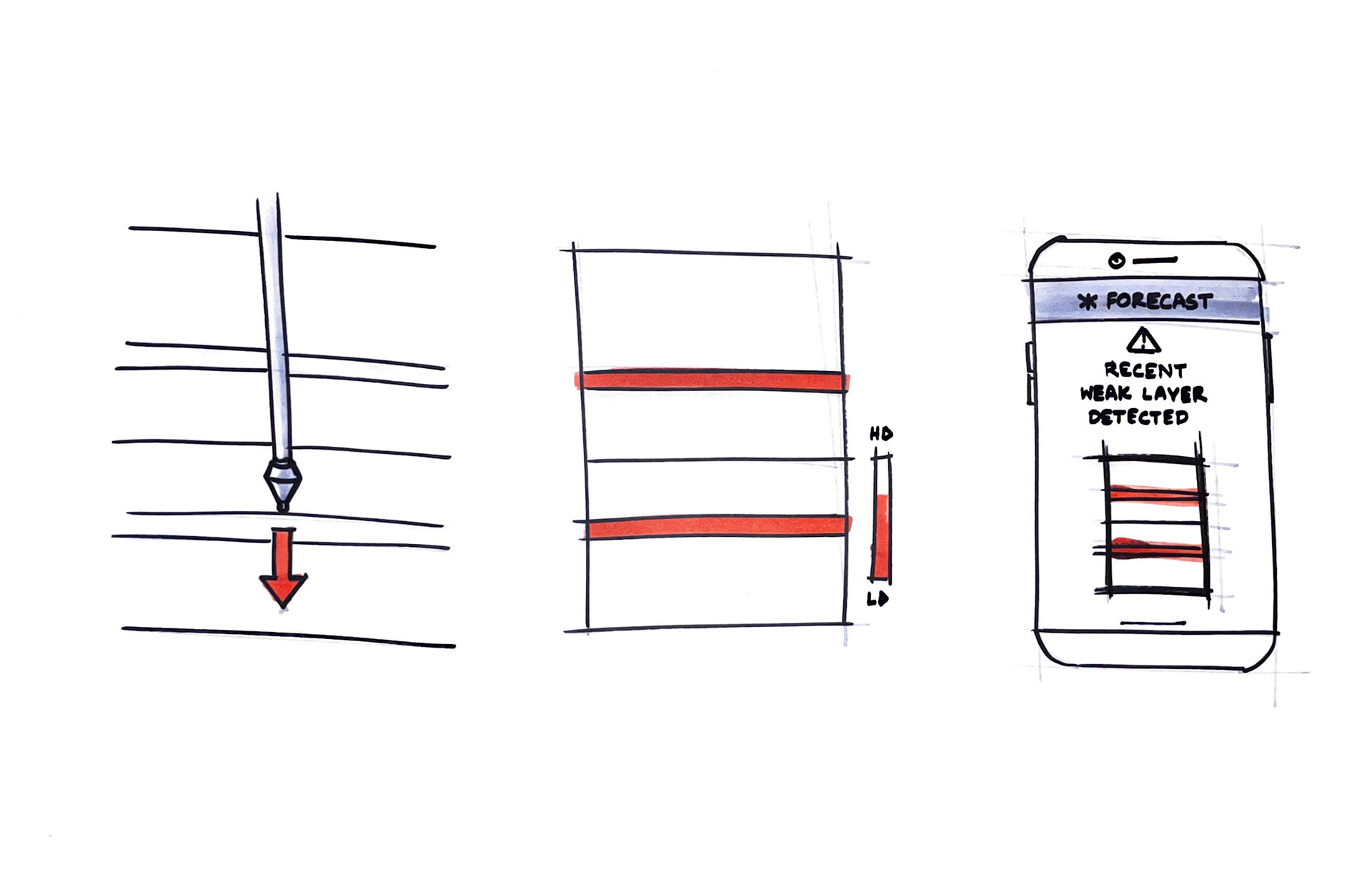 I quickly realized the most important advantage of robotics in an avalanche context ⁠— automation allows the operator or user to be far away from dangerous slide conditions.
Still, I was encouraged to come up with another concept that was more focused on the rescue aspect. The first two drawings below demonstrate a robotic auger that could dig out an airway for someone already buried in an avalanche, buying them extra time for rescuers to arrive. The other drawings are updated, digital versions of my previous concepts. I presented these three ideas to Fresh for my first round of feedback. 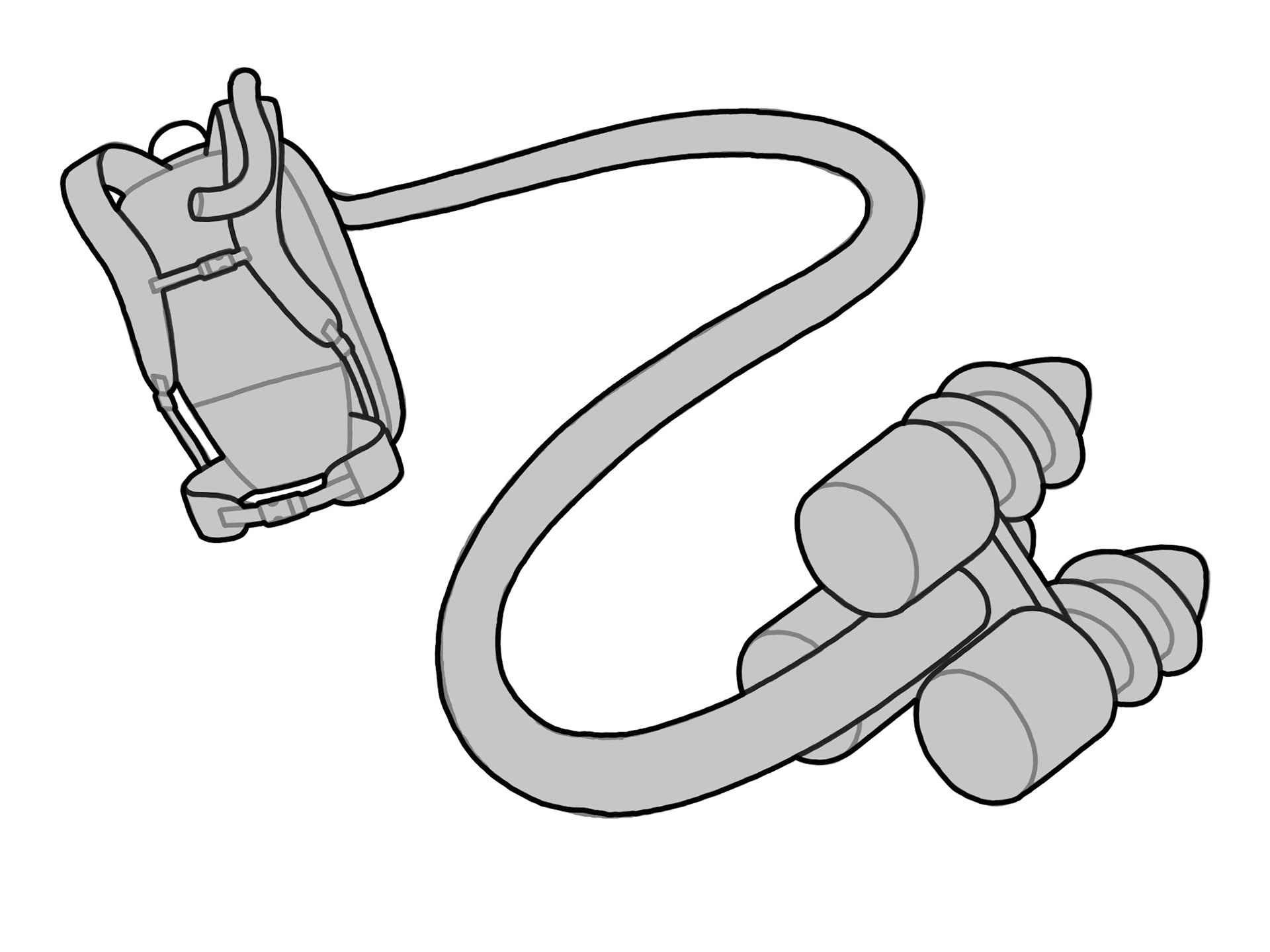 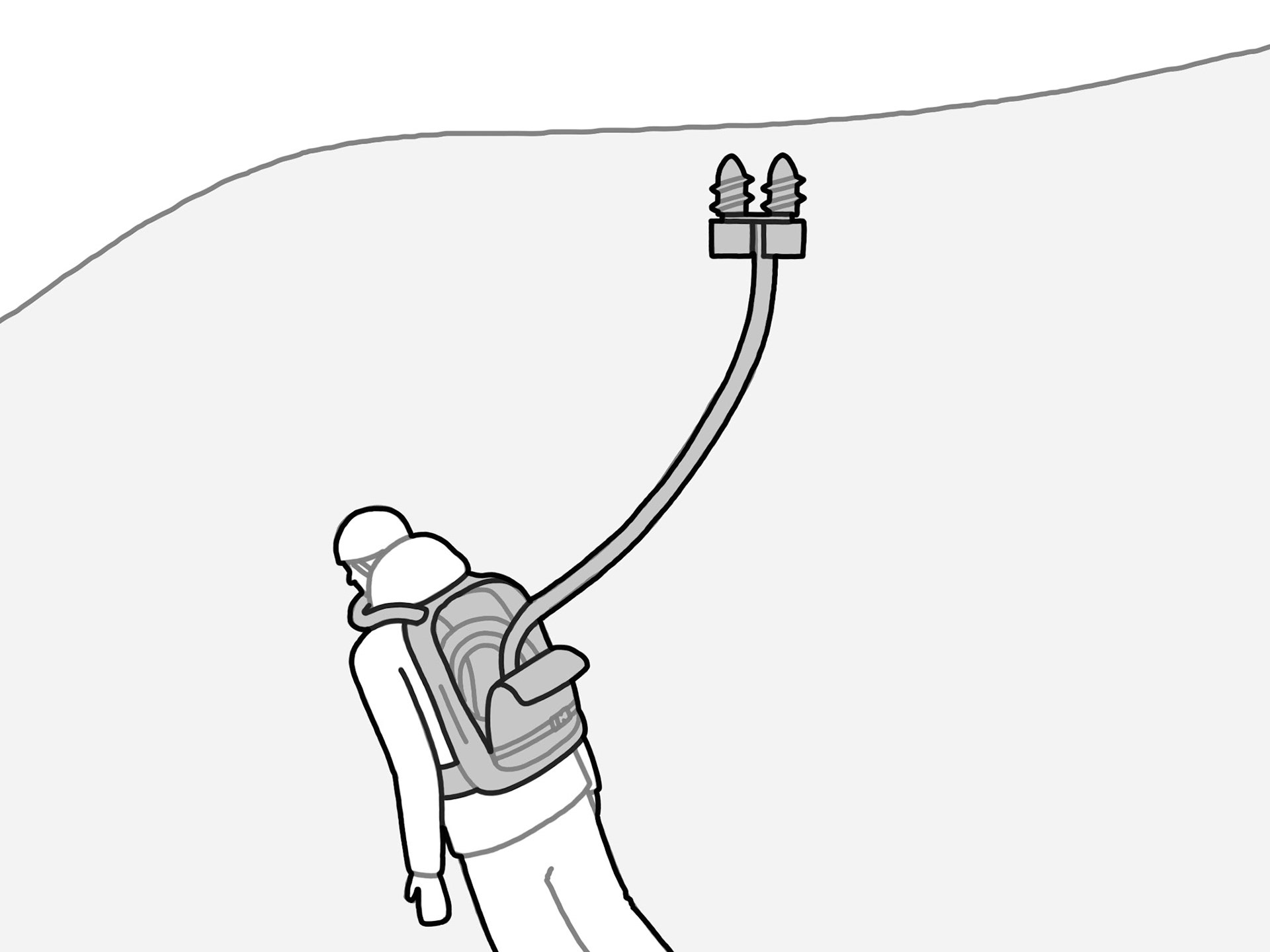 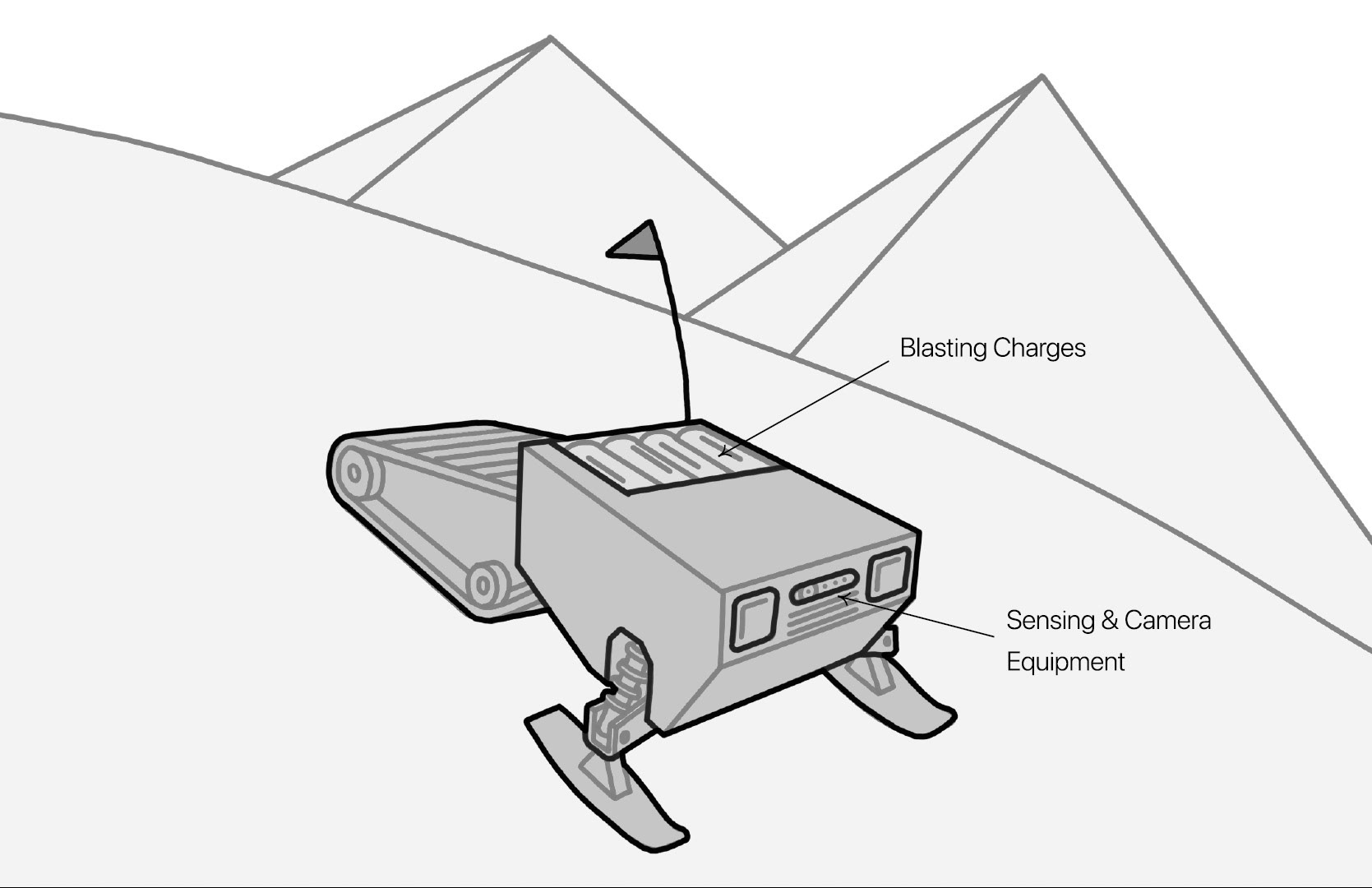 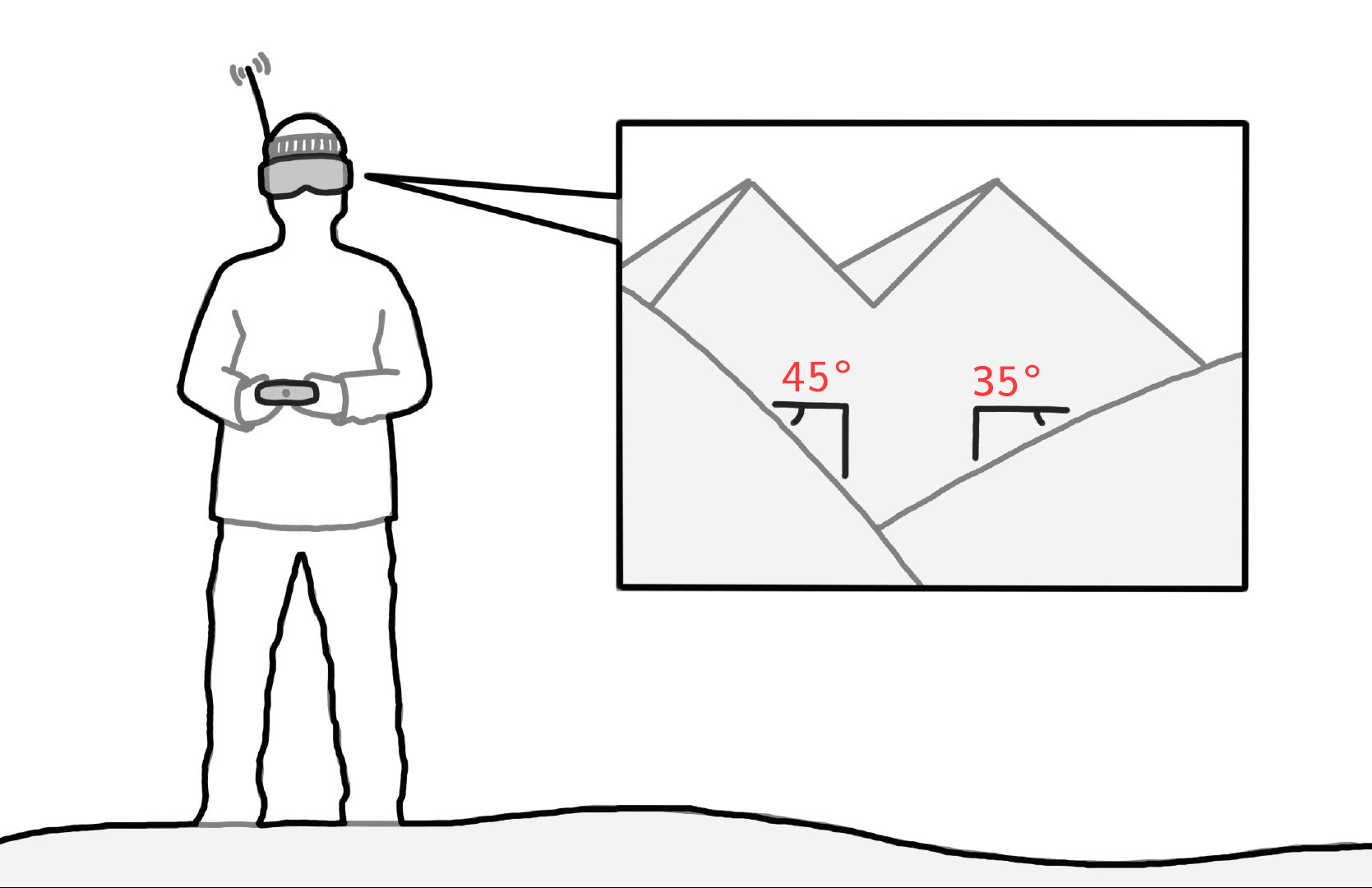 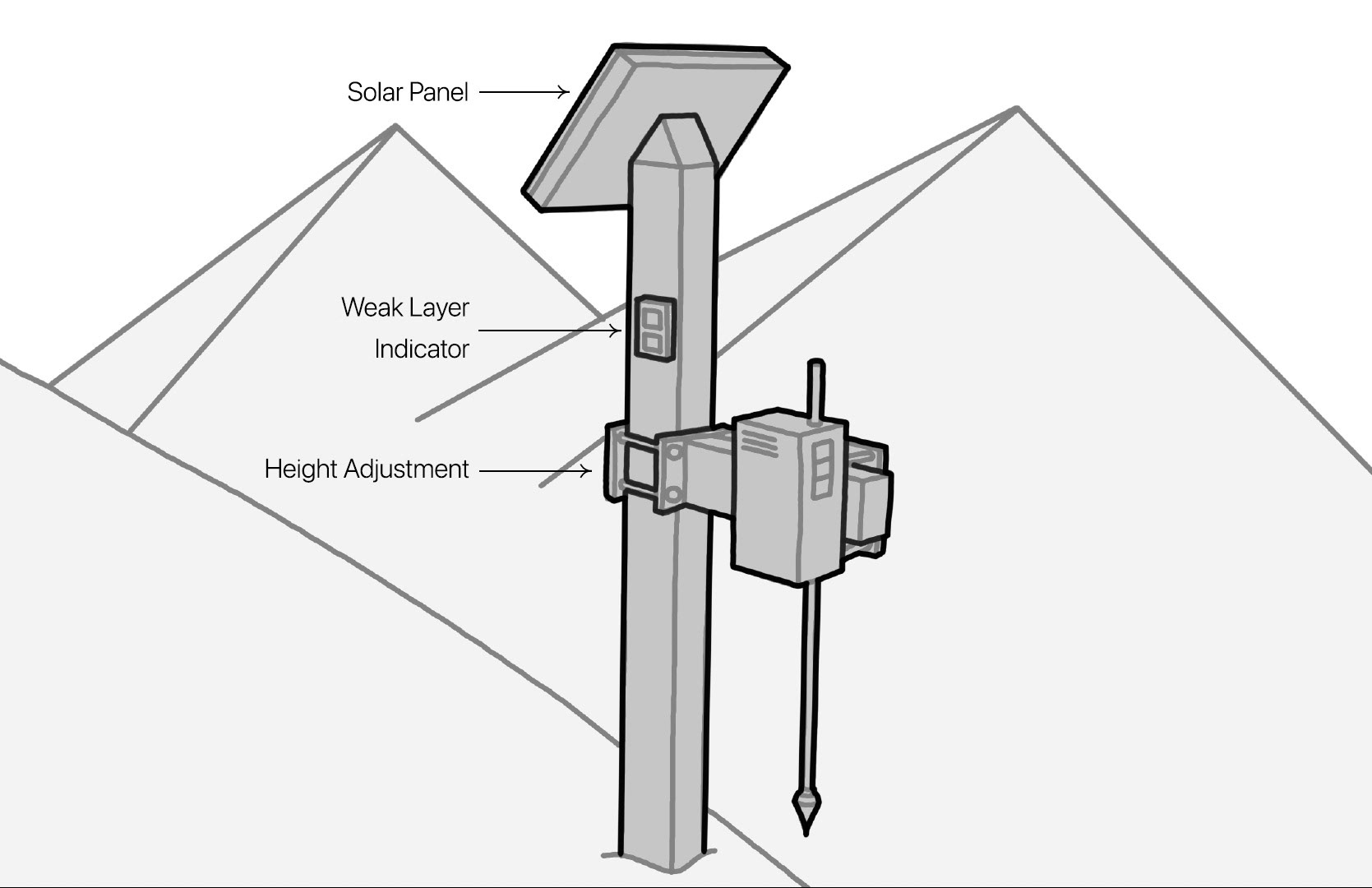 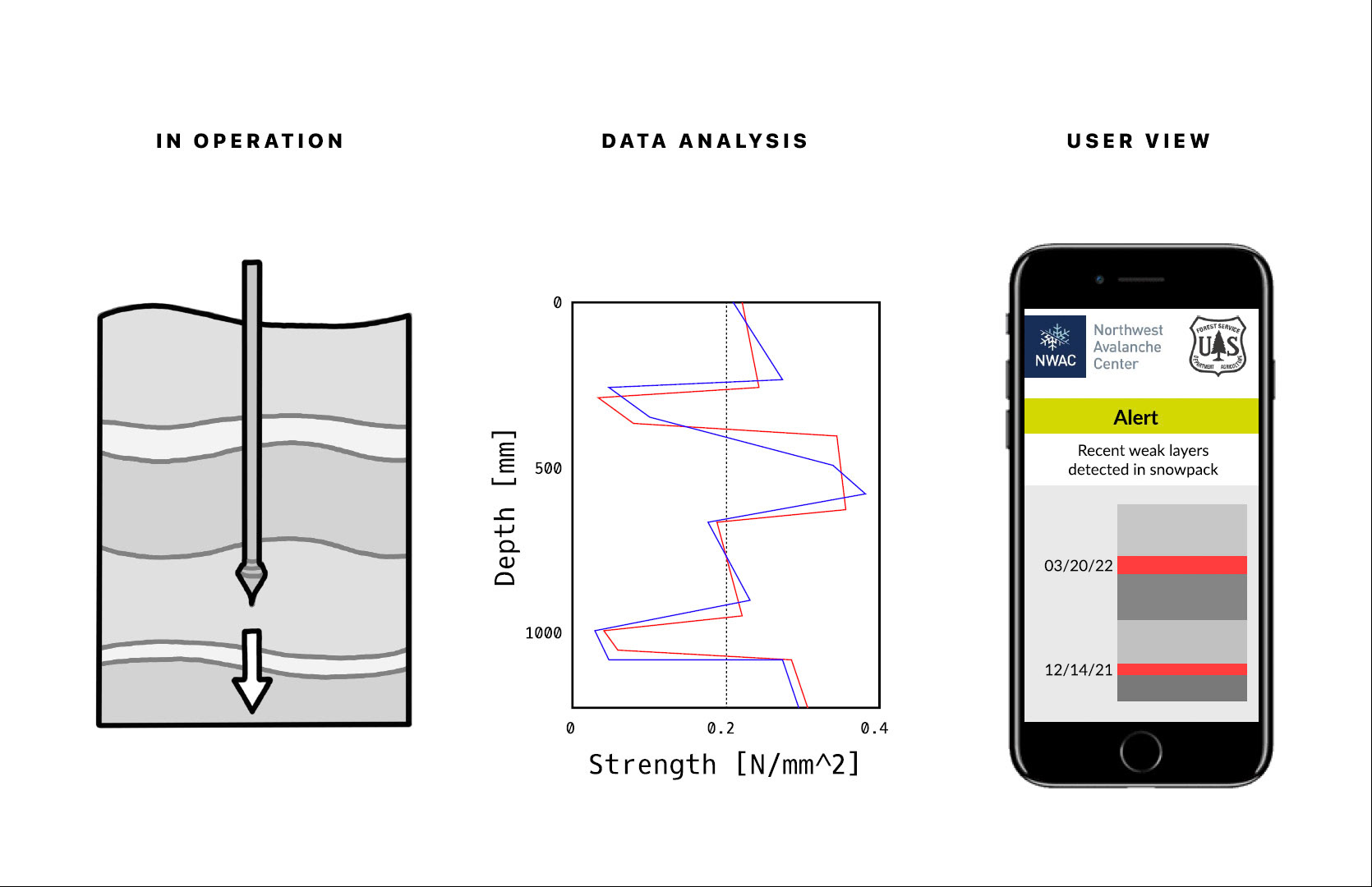 I received some great responses from the engineers and designers at Fresh:
"The airway creating robot is very interesting, out of all the options I would like to work on that one the most, however, I would know the work would not be practical.  It’s a good concept but I would not put my life into its hands."
"I think that [the avalanche station and airway digging] concepts are going to be challenging to create a robotic experience. I feel the [snowmobile] that could observe and set explosives for avalanche control is a good choice. Consider leveraging the idea that the snowmobiles are autonomous systems which would make the experience more robotic."
"[The avalanche station] could be an interesting IoT solution if you had connected weather system sensors. Ex. Strava tracking but for skiers/snowboarders and the weather. Community based weather monitoring beacons."
I also received tons of helpful presentation critique from Chris Trunek (Daymaker Touring), who saw some potential in the avalanche station concept:
"The [station] seems well thought out and feasible. This could be great if you wanted to do a U.I. also. The station itself is more of an engineering exercise but the controls and overall look could make sense to design if people were interacting with the stations directly."
Based on their thoughts, I decided to move away from the airway digging robot. Additional feedback from my professor and classmates (as well as the short timeframe for the project) encouraged me to pursue the mechanically simpler avalanche station over the autonomous snowmobile for my final product.
I came up with several massing sketches, all focused on the main probe enclosure (circled in blue in the first image), to help me visualize how the station's internal components might affect its form. 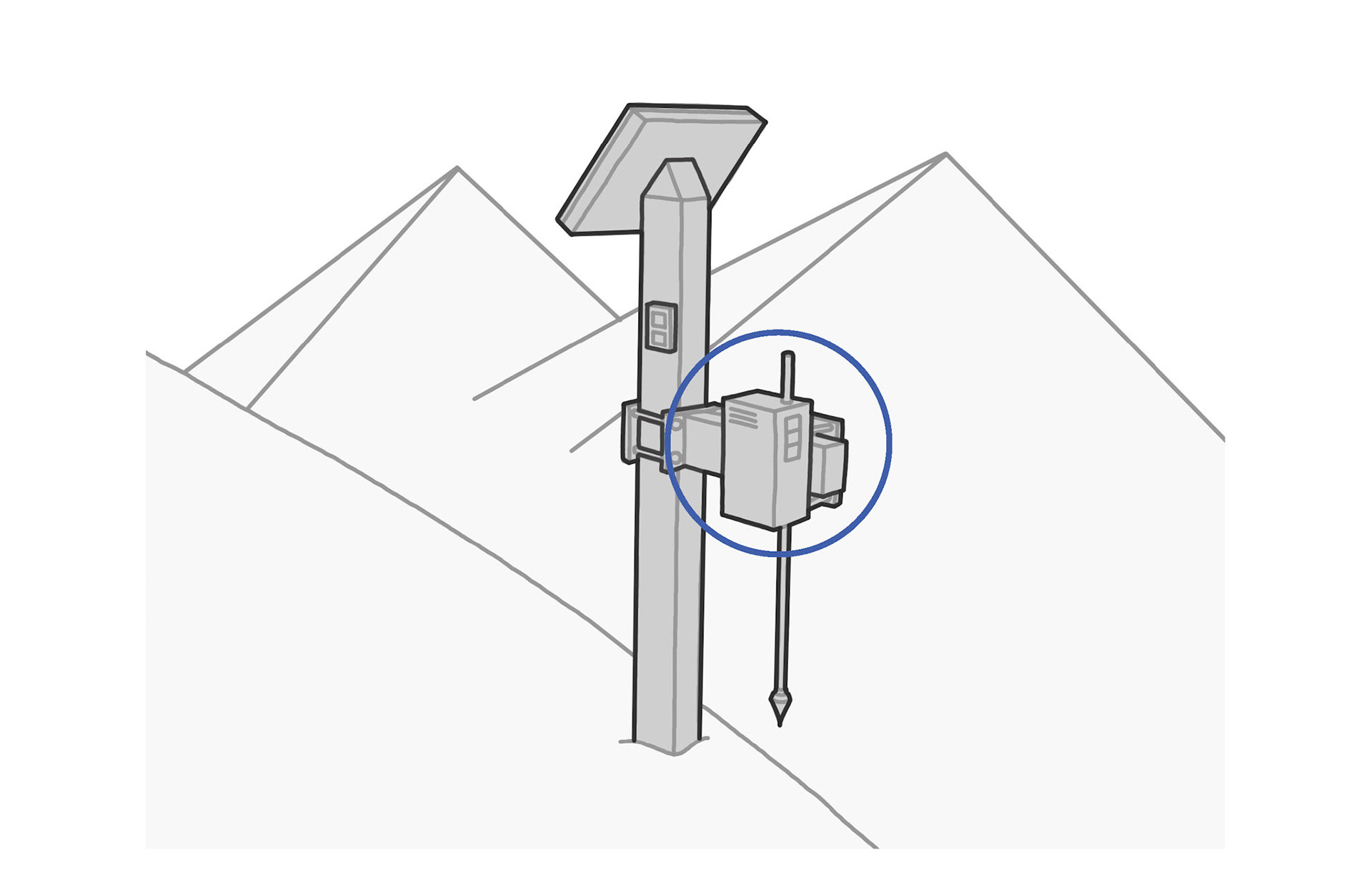 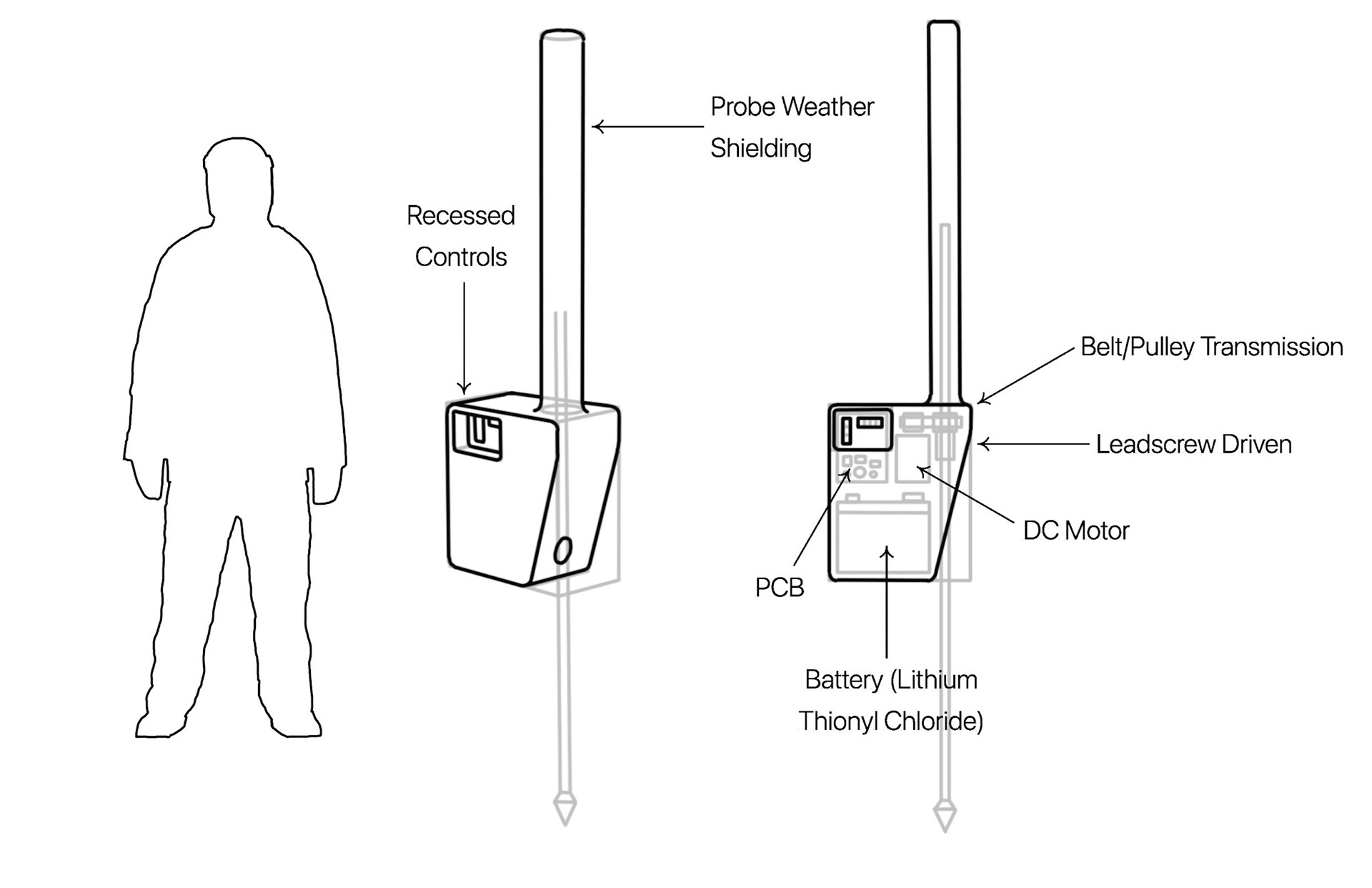 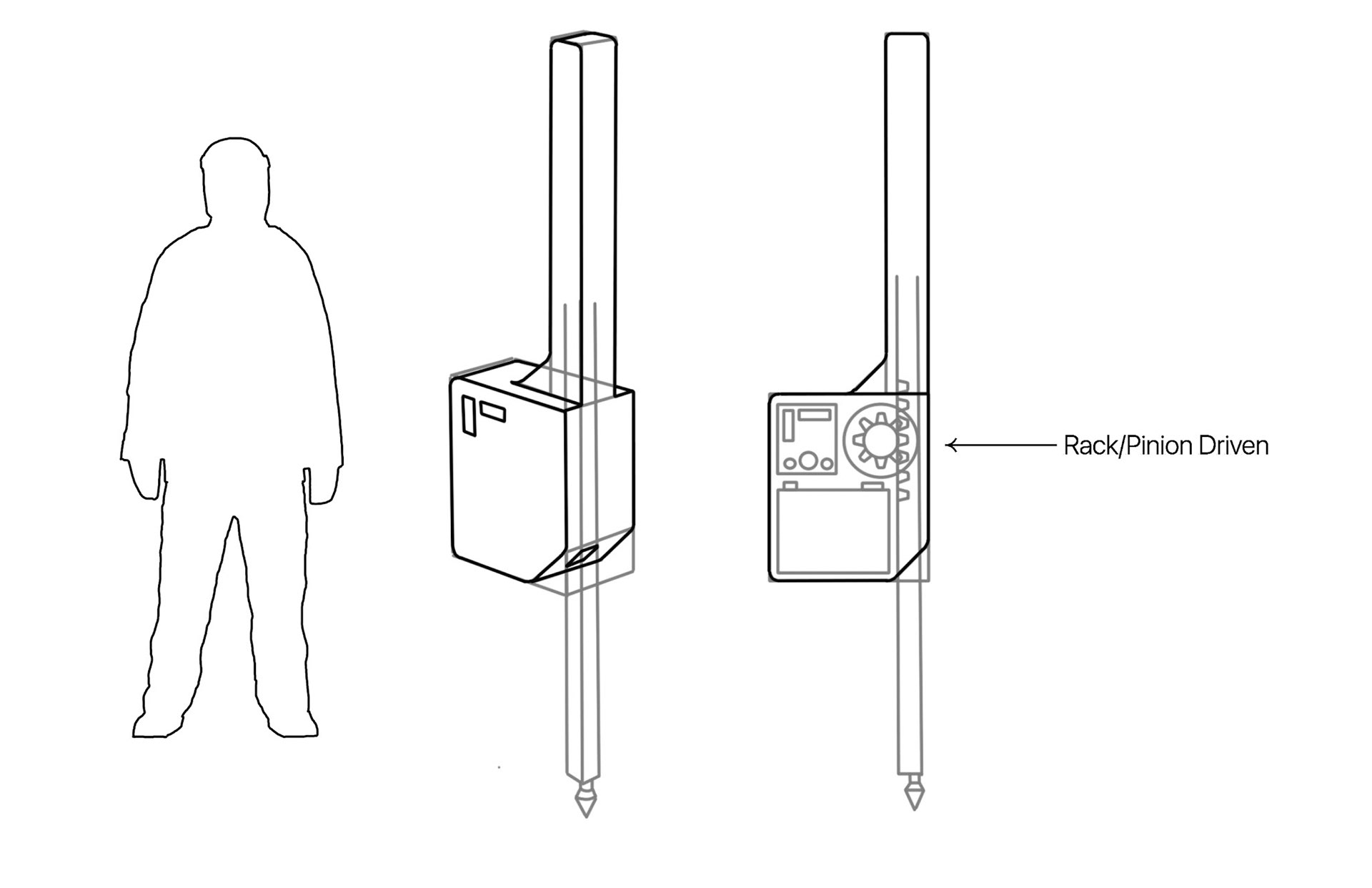 After receiving more mechanical feedback from the Fresh engineer and my professor, I decided to combine the leadscrew drive with the enclosure form shown in the third drawing.
I also created a low fidelity foam model of the station which I presented along with my massing sketches. 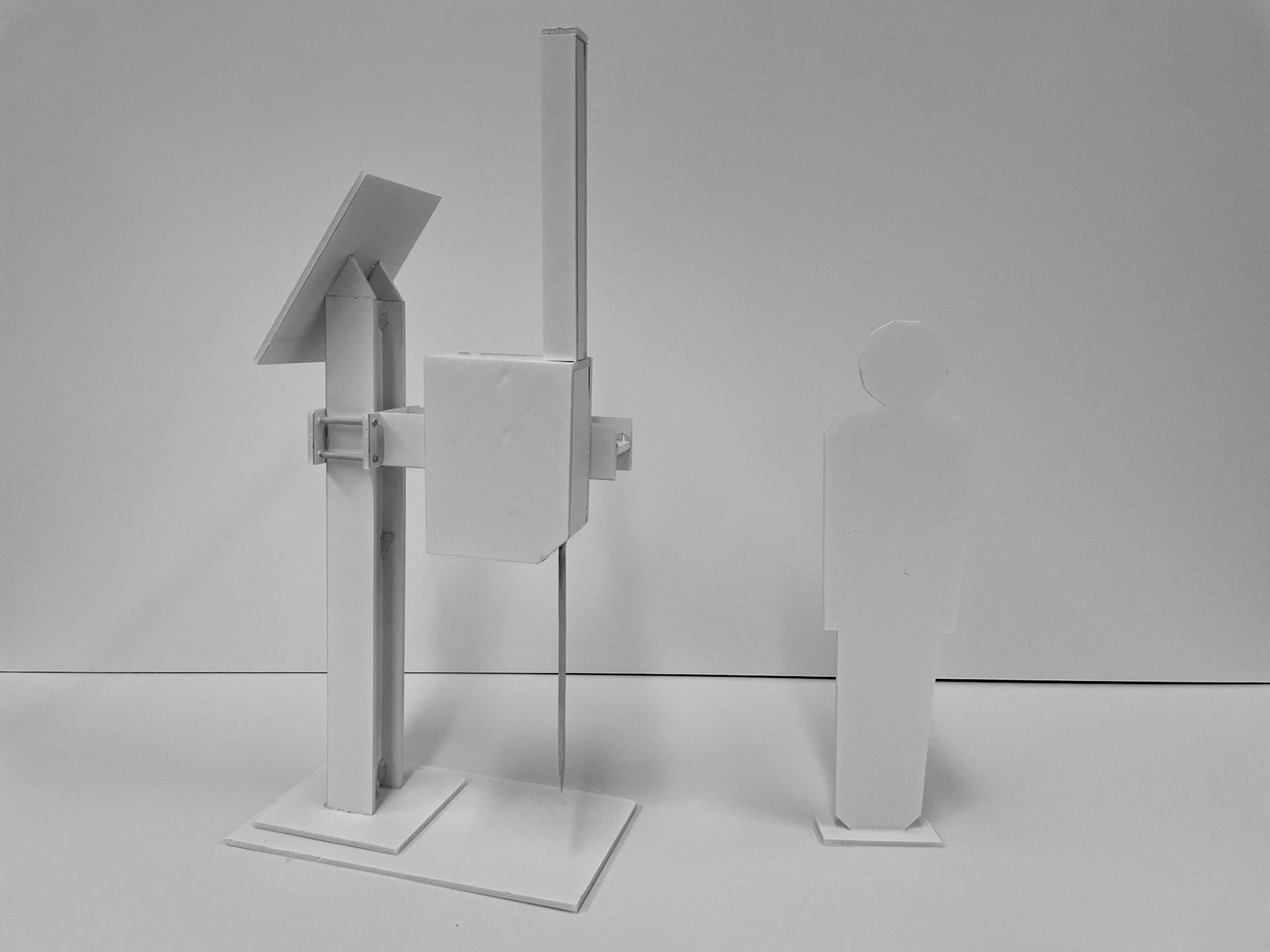 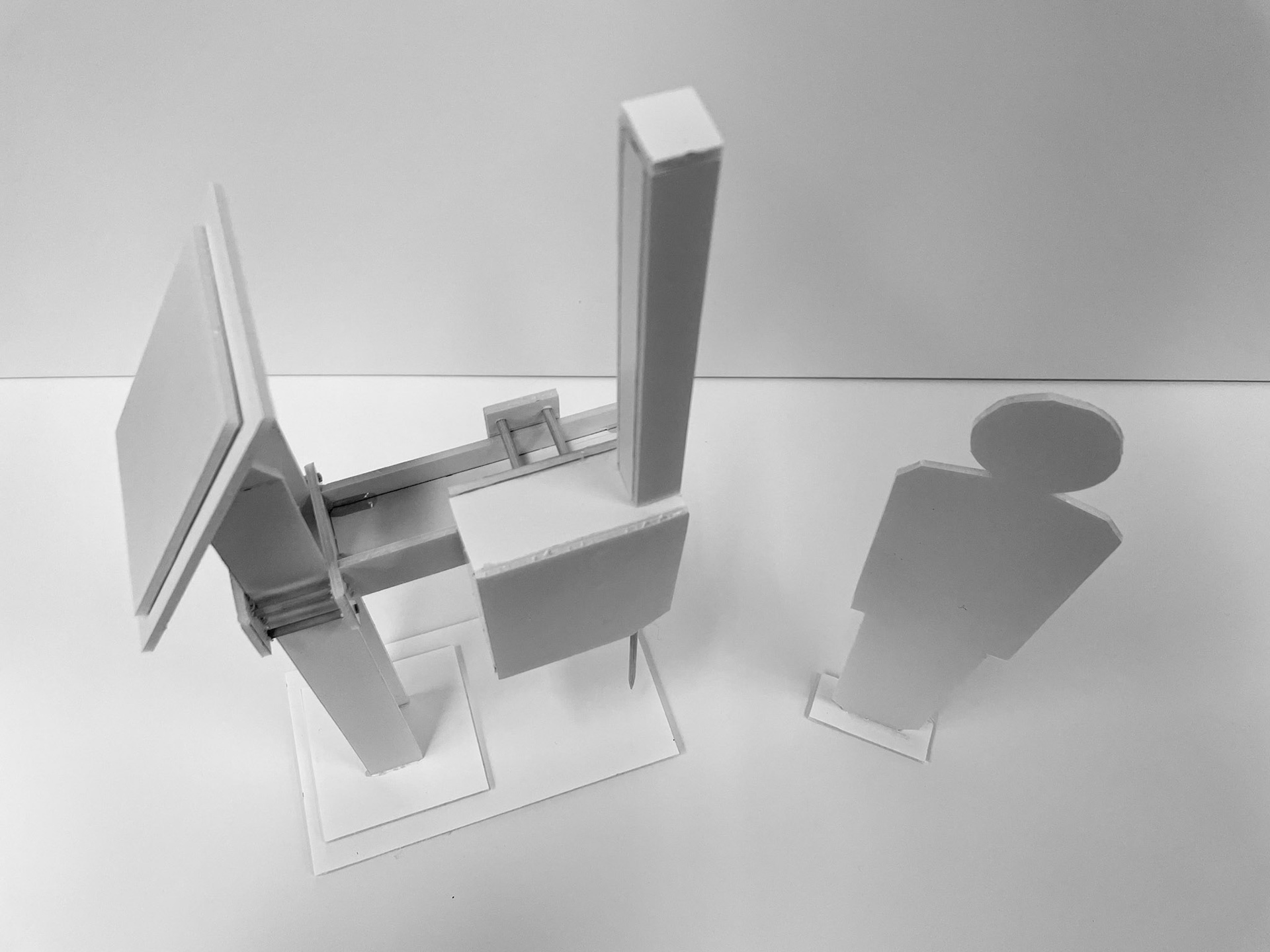 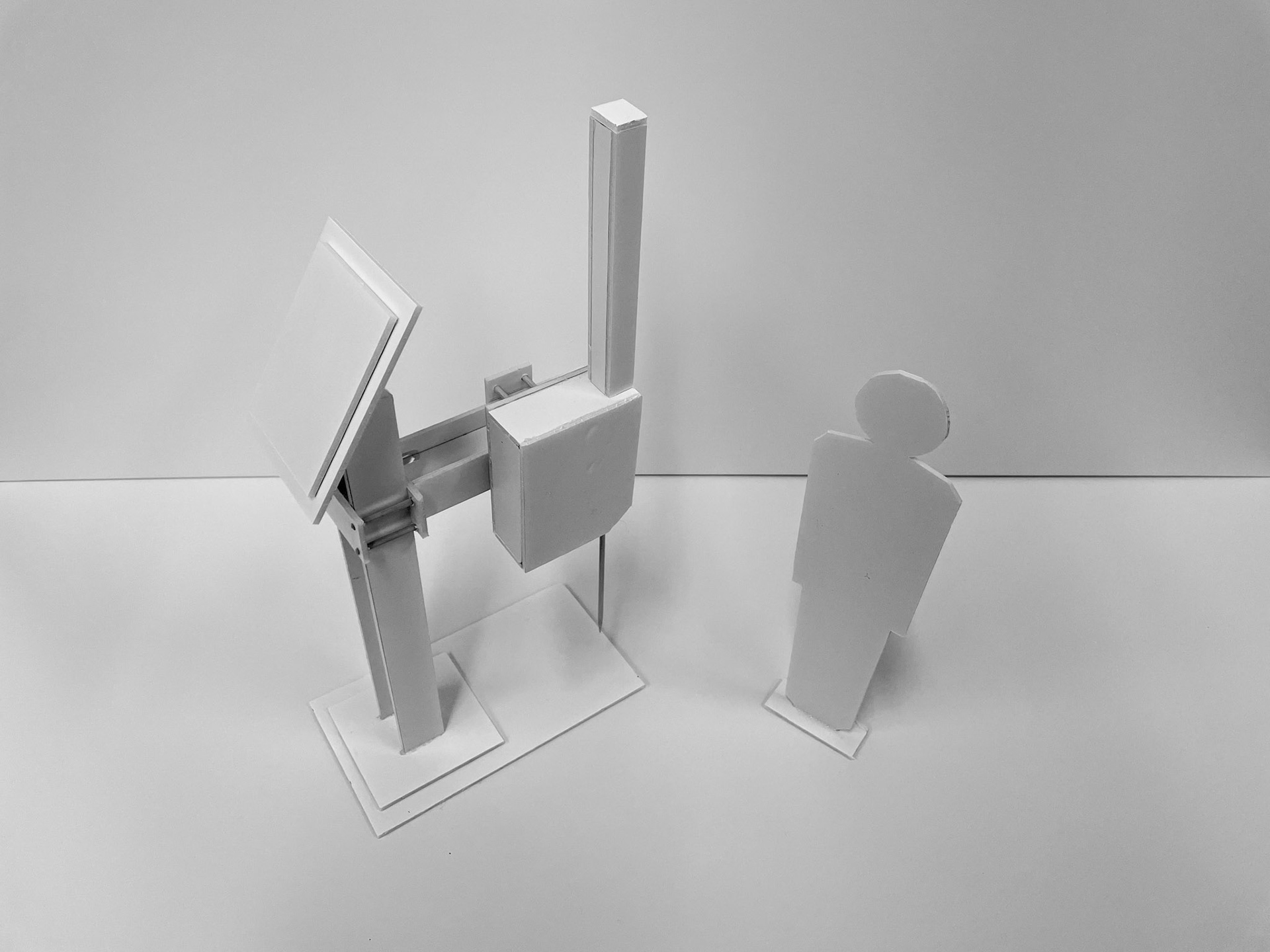 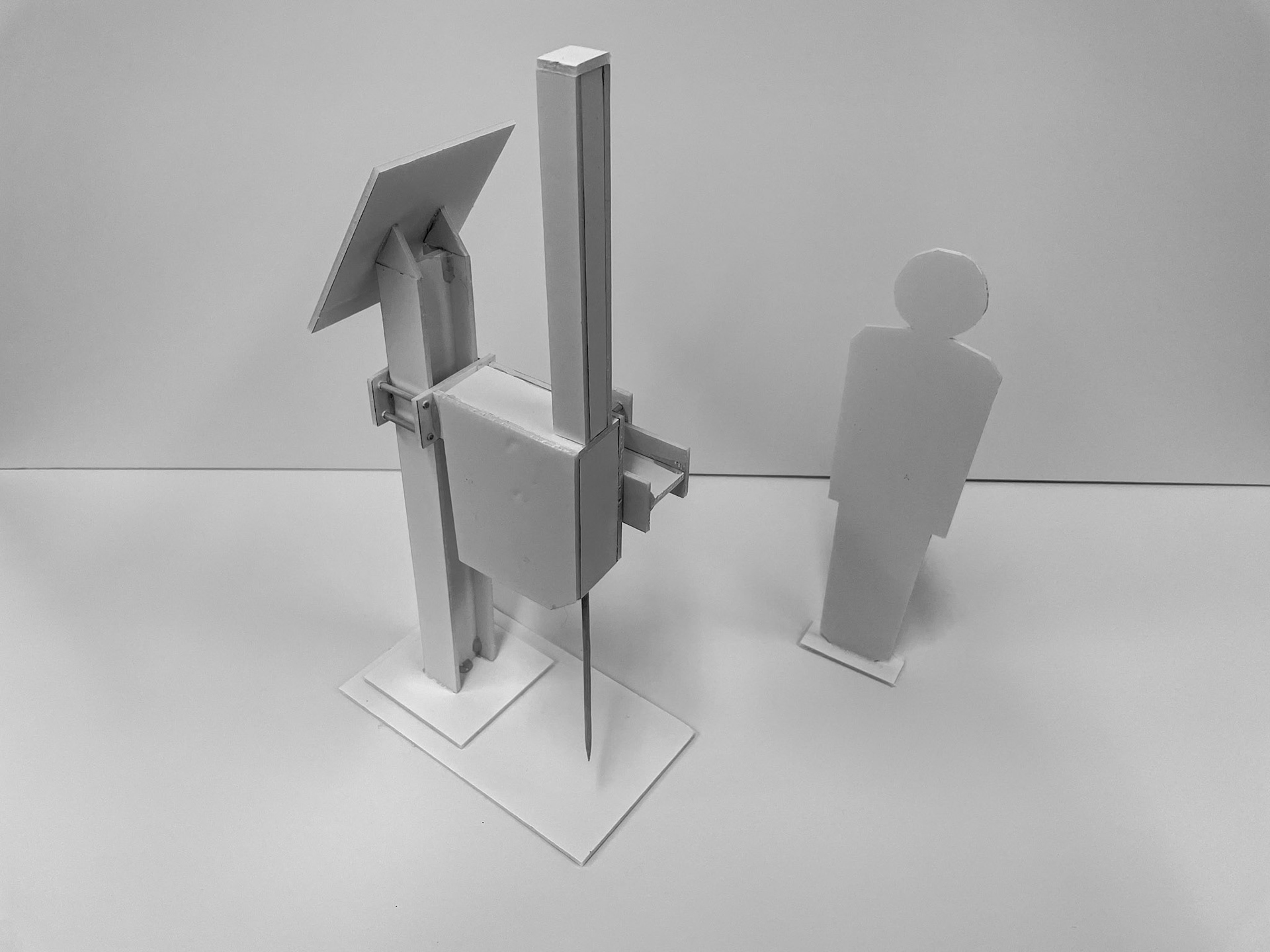 Using what I learned from the massing sketches and foam model, I began work on the CAD for my final model and renderings. Because I intended to 3D print many of the parts for the physical model, I used Solidworks to create two sets of part files: one fully detailed for rendering purposes, and another set designed to be easily printed and painted.
At least one part of our model had to be made from polystyrene foam, so I created front and side templates of the enclosure and used them to cut and carve out the form.

I 3D printed the rest of the parts (aside from the wood structural beams and wire probe) before priming and painting everything white as required by the assignment.

The render CADs were nearly identical to the 3D prints, but they included parting lines, buttons, fasteners, and other features that could not be easily printed. After modeling in Solidworks I used KeyShot to render several views of the enclosure and the station as a whole. 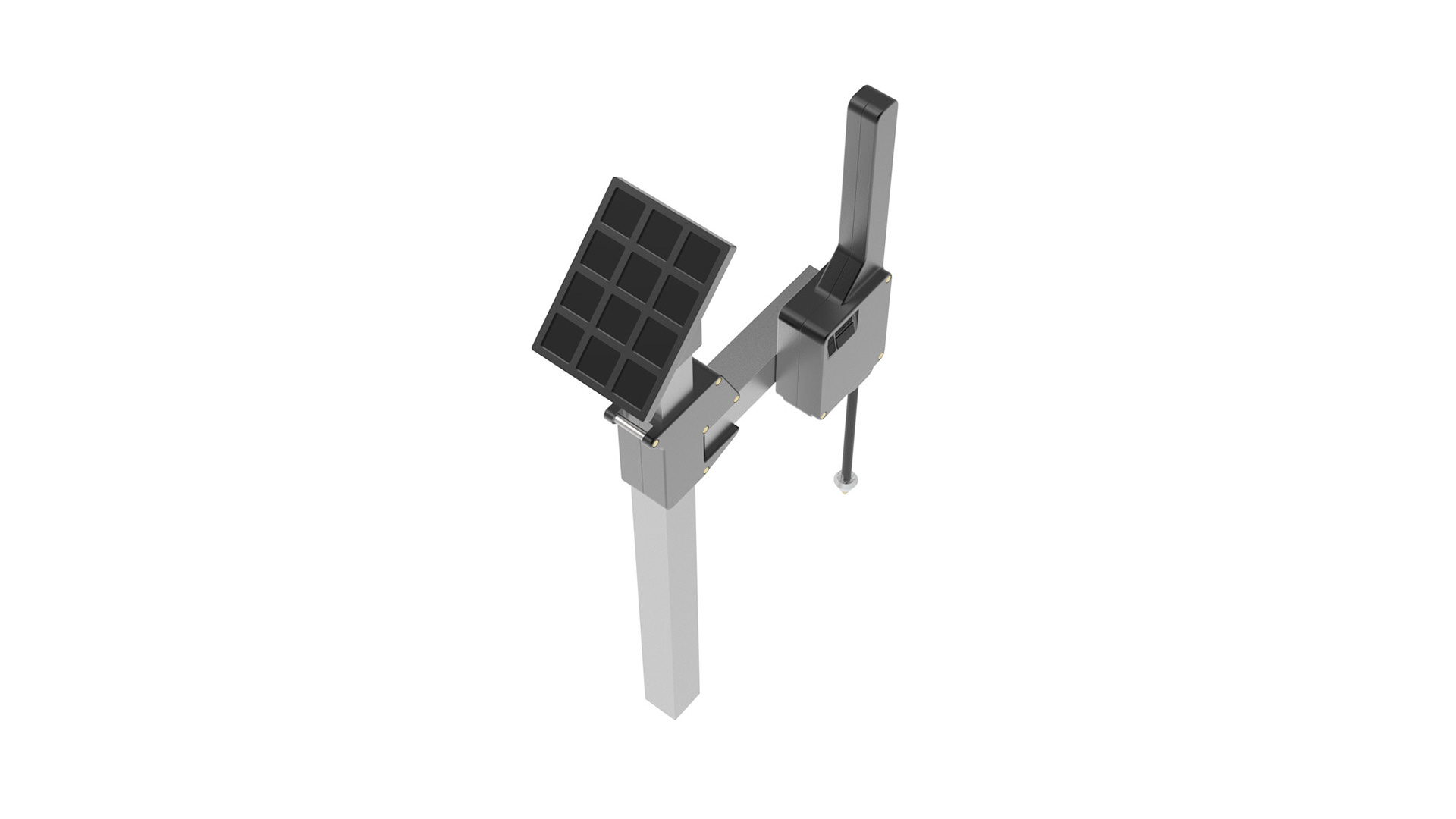 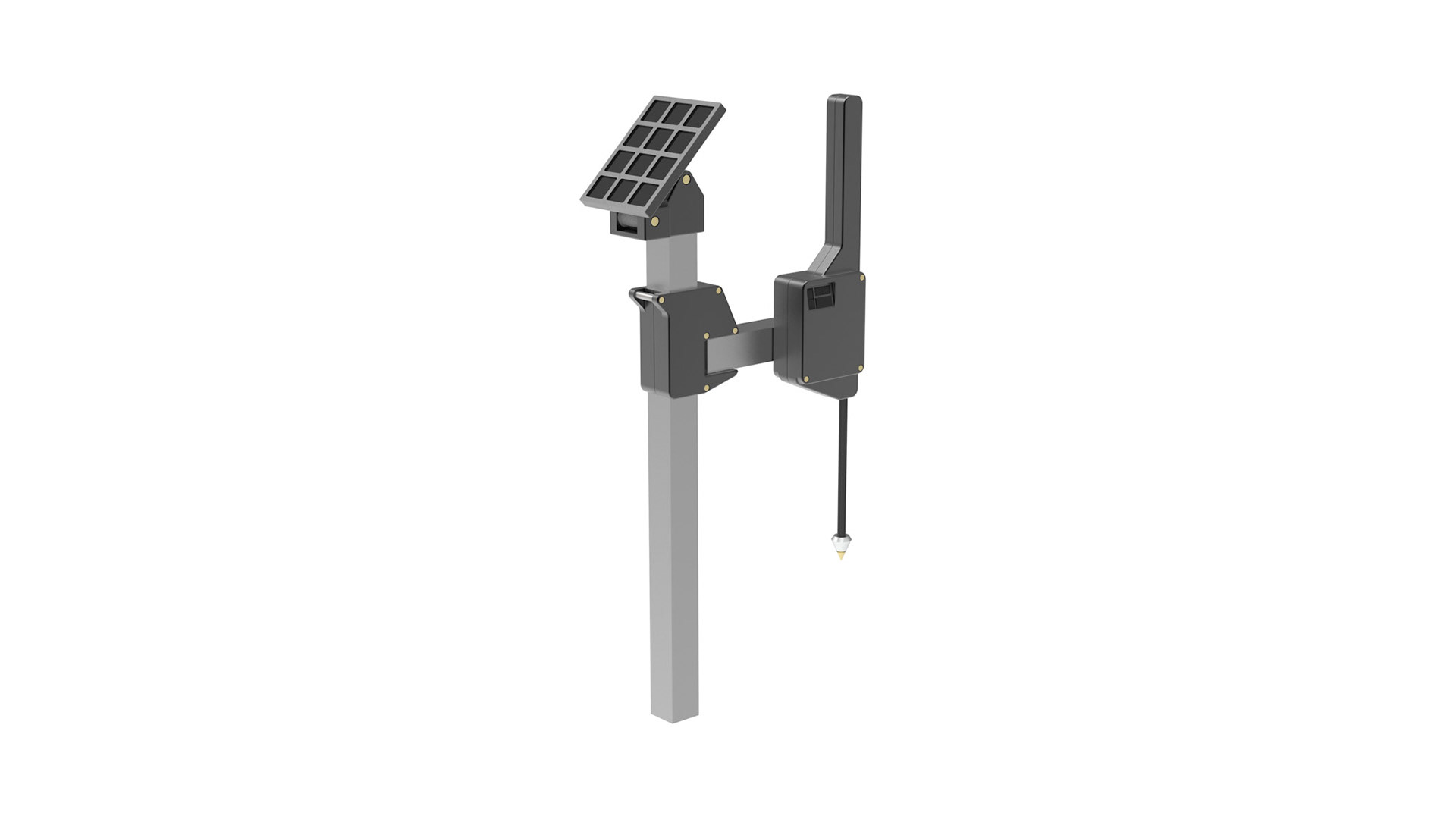 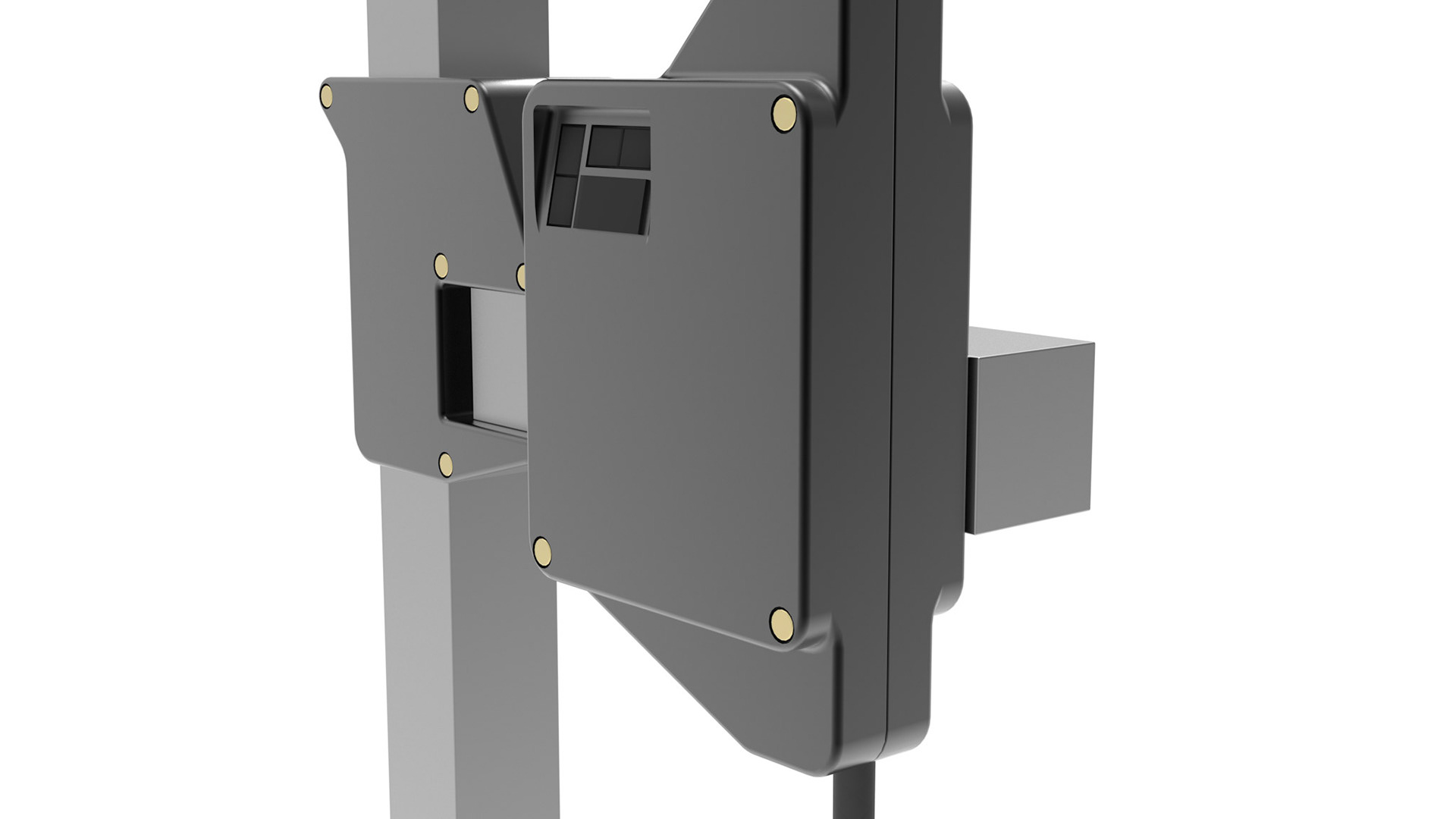 I used these renders and some other illustrations in my final presentation to Fresh, where I explained my problem statement, how it is solved by the avalanche station, and several key features. 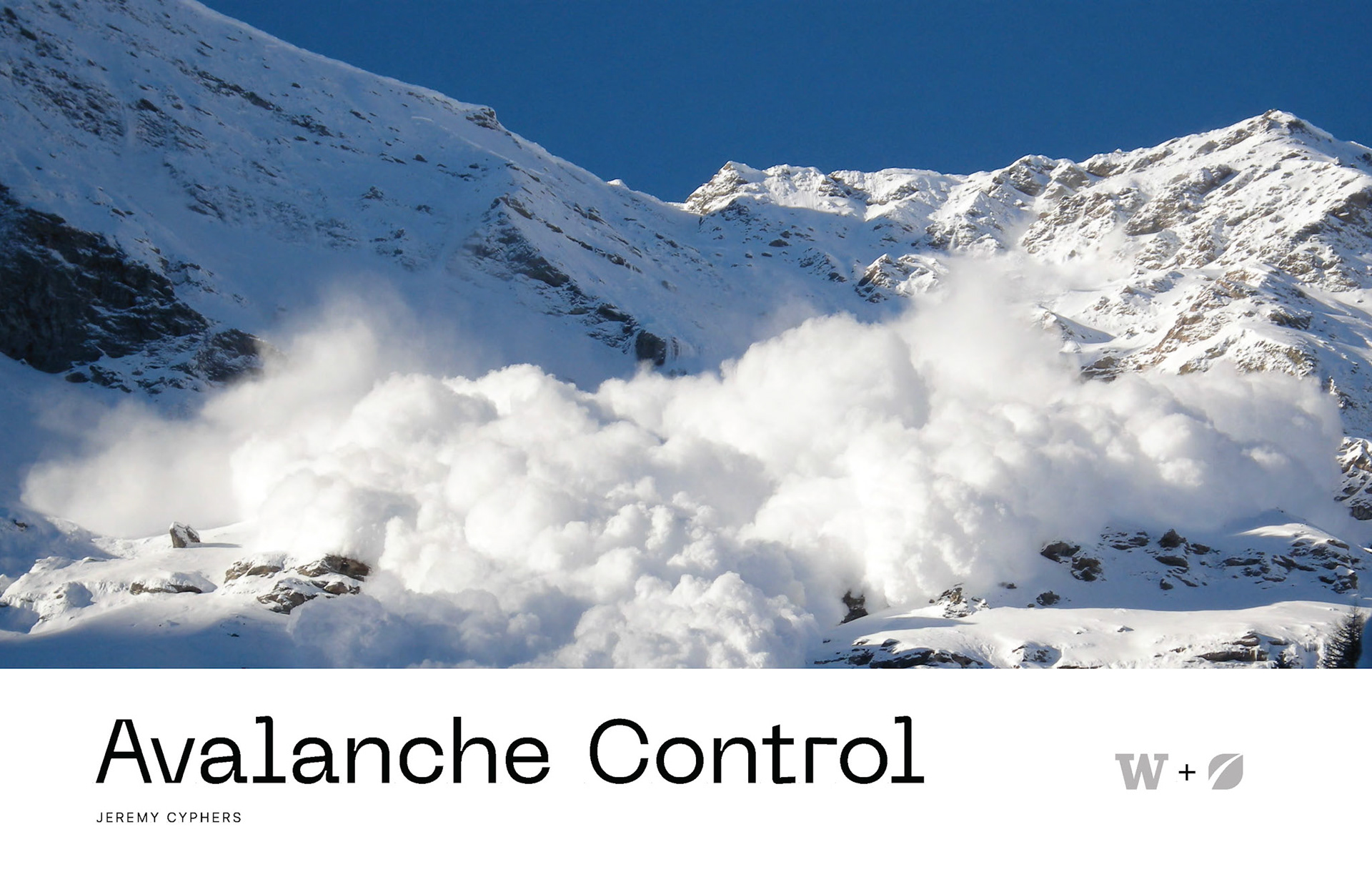 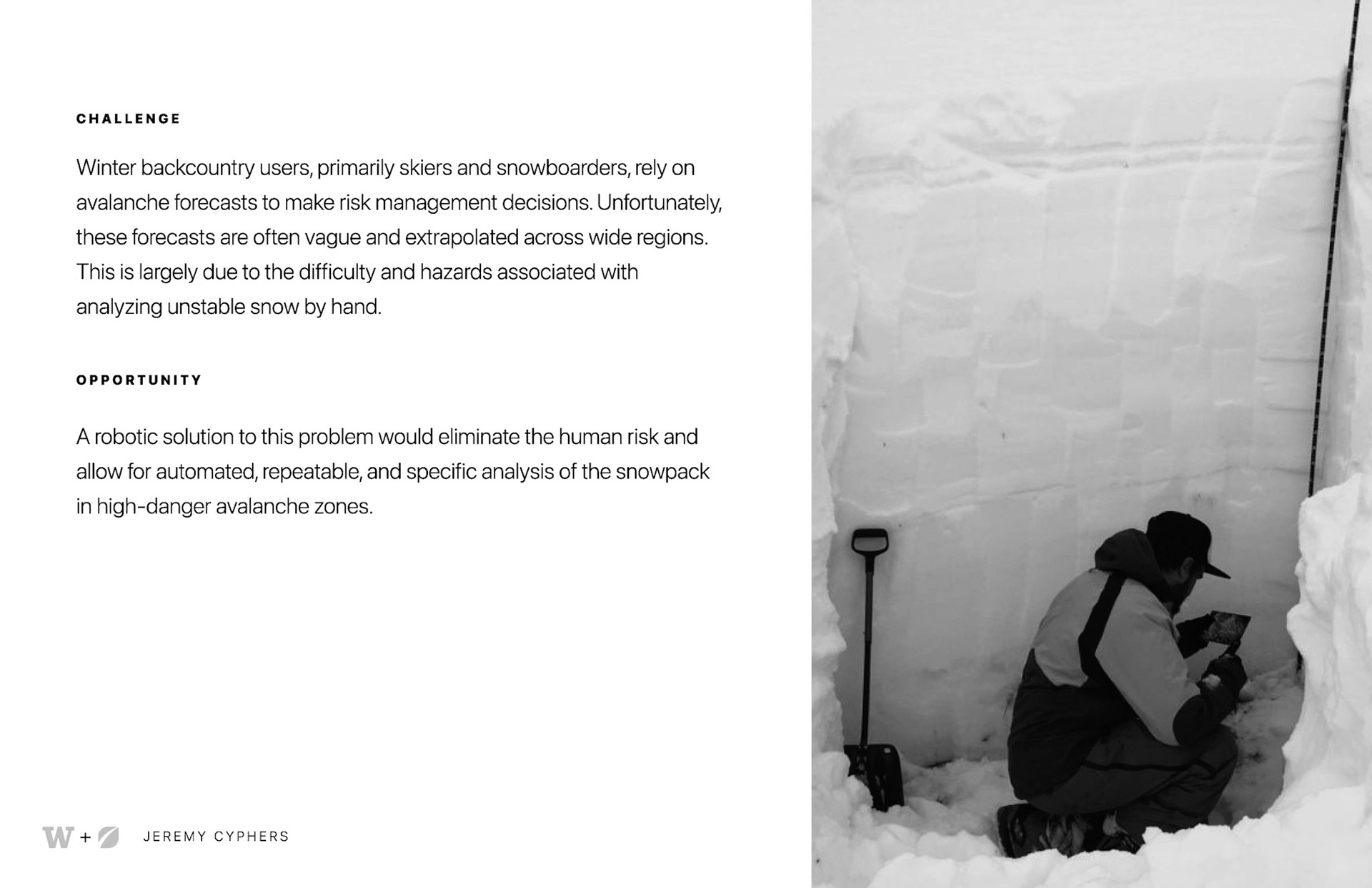 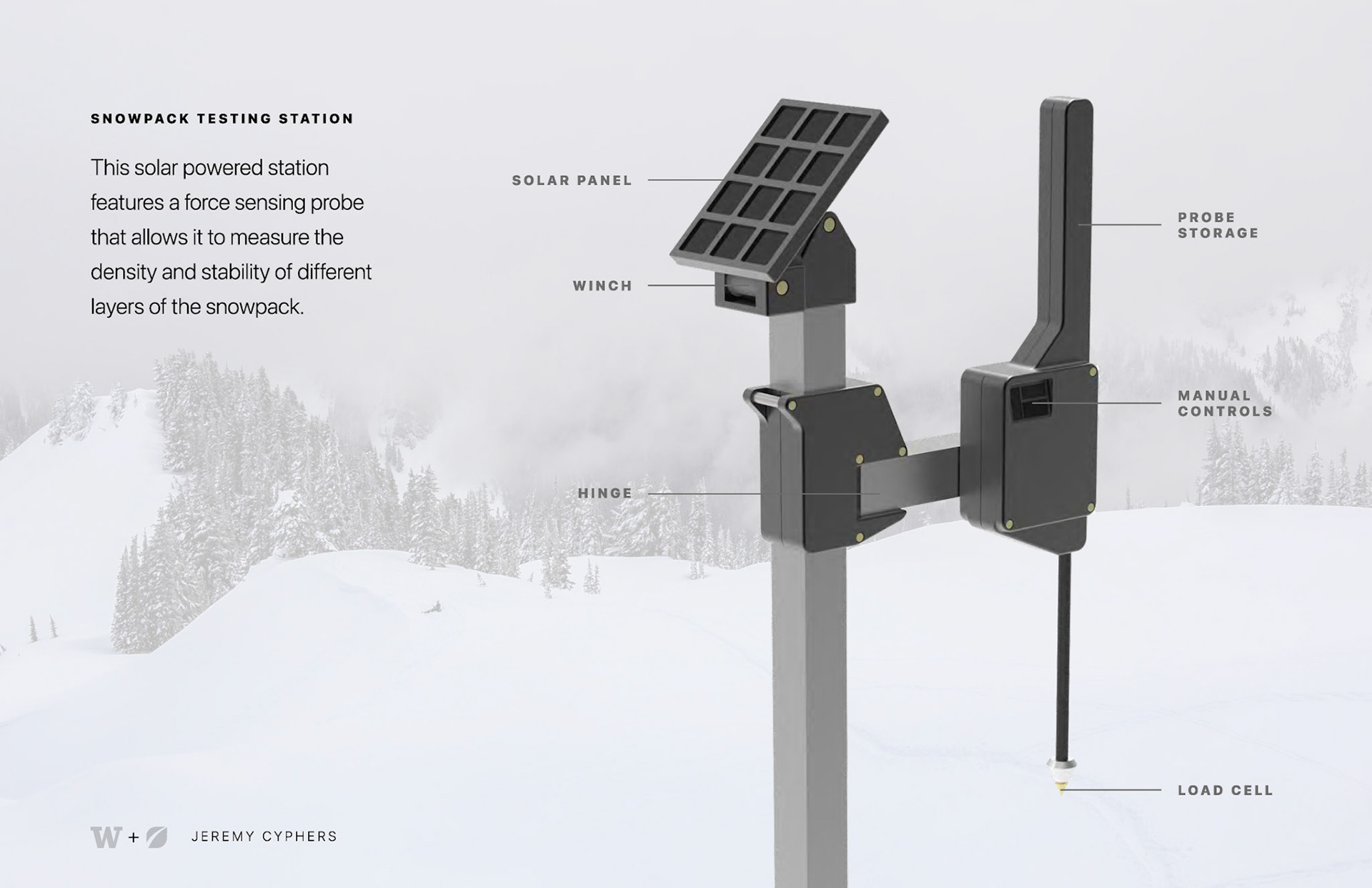 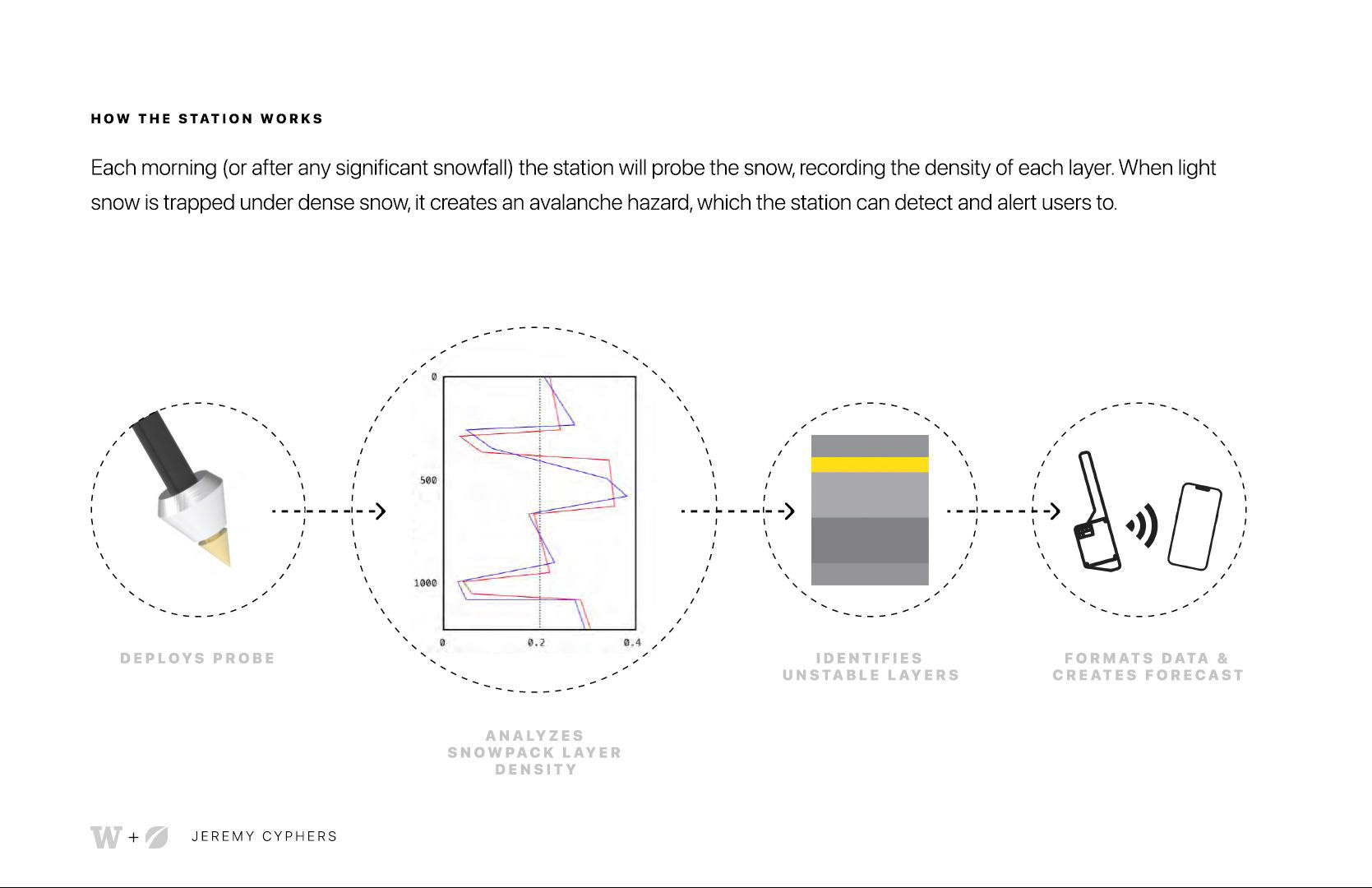 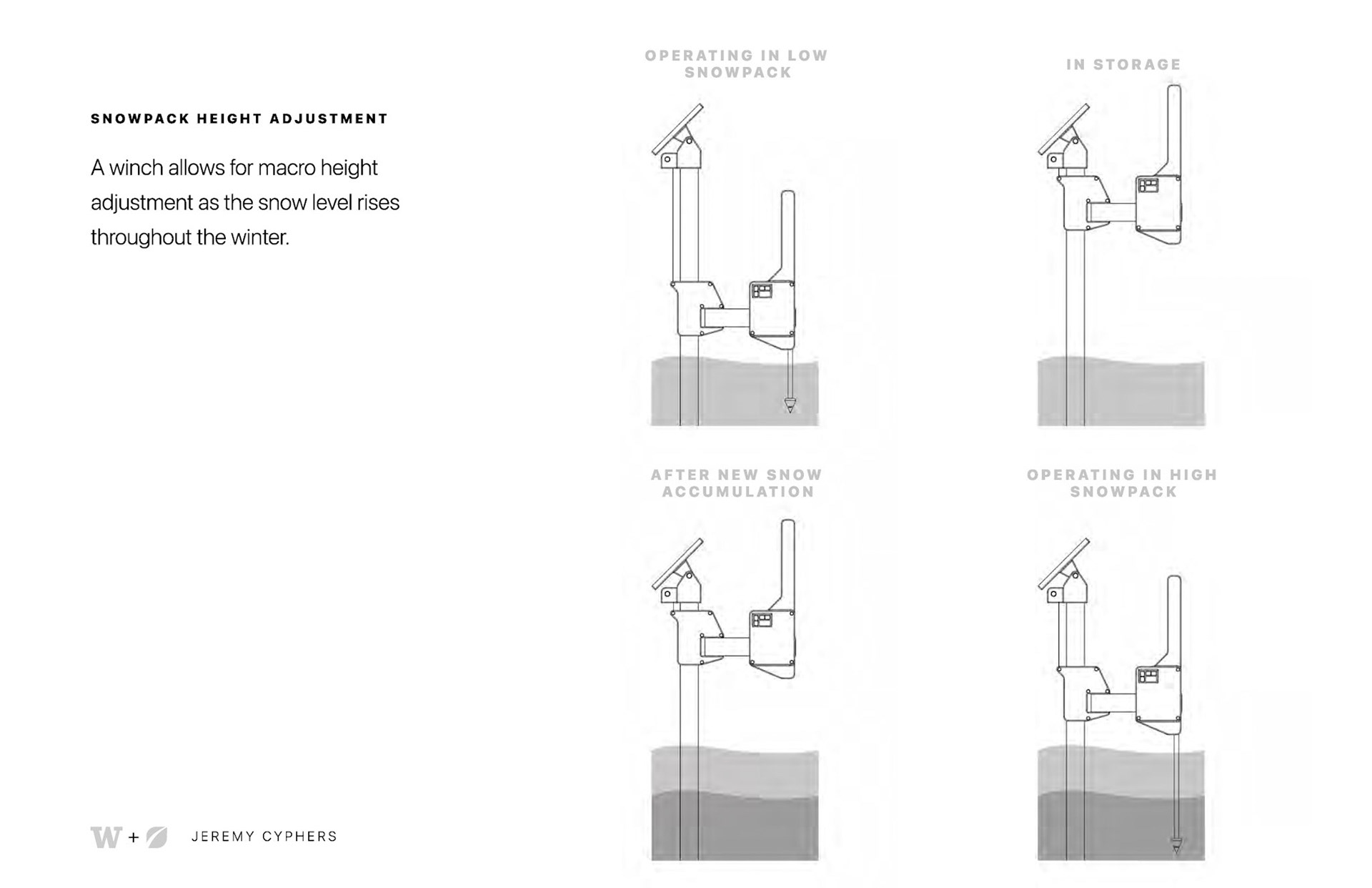 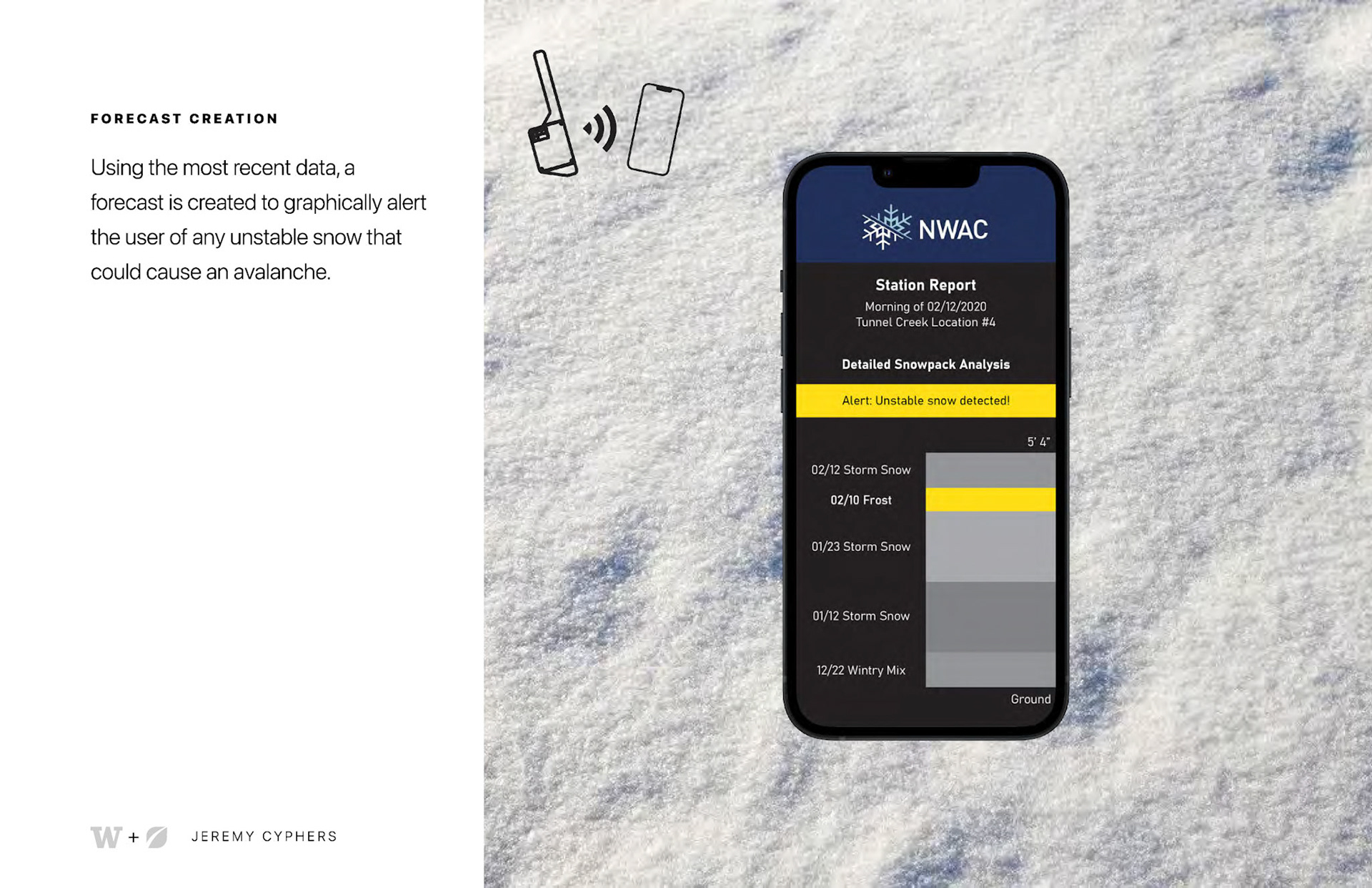 I also presented both of my models to show how the design progressed according to the feedback I received.

I plan to continue this project in my Design Capstone course.
↑Back to Top